This summer in Israel/Palestine, I visited several Bedouin communities. At Al Araqib I marched with the women and girls of the village—which the IDF has leveled more than 100 times in the last six years—from one of its hastily re-erected gathering spaces, across the desert hills, under the hot summer sun, to a building in which employees of the Jewish National Fund (JNF) waited to forest over this Palestinian land. The women of the village yelled and chanted and sang in the vicinity of the JNF building until the police showed up to disperse our group. The women backed down quickly: After so many of these kinds of actions against the forces that threaten their lives, they can’t risk arrest again.

All of the villages I visited face similar challenges: the threat of home demolitions, forced deportation, violence from nearby settlements and IDF soldiers, land confiscation, and a lack of recognition by the government as well as a lack of basic services like water, electricity, and sewage.

The case of Umm Al-Hiran is particularly instructive: In 1956, the Israeli military forcibly moved twenty Bedouin families to their current location — but the village they built there was never recognized by Israel. Now the government wants to move them again (to one of several designated “Bedouin areas”), destroy the village, and build a new Jewish settlement, to be called Hiran, on its ruins. Just last week, on Tu Bishvat, rabbinical students in T’ruah’s Year-in-Israel program, in partnership with Rabbis for Human Rights, planted olive trees in Umm Al-Hiran with its residents. Most likely, these saplings will soon be uprooted by the Israeli government.

In this week’s parshah, Mishpatim, is found one version of the Torah’s lex talionis, the “eye-for-an-eye” laws. These are usually considered among the most brutal laws in the Torah, and not without reason. Yet the rabbis of the Talmud are quick to mute the brutality: After much back-and-forth discussion, they interpret “an eye for an eye” as monetary compensation. Over the course of several Talmudic pages, the rabbis use the question to explore their understanding of human beings and our responsibilities to each other. Their ultimate question is less the exact meaning of the Torah text than the societal values that criminal law encapsulates.

Some of the actions of the government and military are technically legal under Israeli law, but as our rabbis demonstrate in their interpretation of Torah, simple adherence to the letter of the law does not a just society make. What societal values are encoded in laws that mandate the destruction of homes?

One detail in the rabbis’ discussion merits emphasis. The anonymous voice of the text begins: עין תחת עין אמר רחמנא, “‘An eye for an eye,’ says the law.” The word that is used for “the law” is רחמנא, which is literally a name for God, “the merciful one.” This is not common usage in the Talmud, and to me, the metonymy is meant to emphasize the rabbis’ understanding of the essence of the law. The just God of the Torah is one of compassion: Their aim is to read Torah in a way that upholds both law and mercy.

In mid-August, I went to Umm al-Khair one morning following a report of demolitions of four United Nations and European Union-sponsored buildings, and I listened to a young boy tell about what happened. He described a horrifying scene: The soldiers came early in the morning, before daybreak, and gave residents five minutes to remove their things. And then the bulldozers drove up and destroyed their homes. He despaired: “No one can help us. Not the Europeans, not the UN, not the Americans. Our only hope is that God will help us.”

That’s not acceptable to me. Of course I want God to help, but I don’t think that should be all that there is. Our rabbis’ understanding of Parshat Mishpatim impels us to understand compassion and mercy as the laws’ animating features. By supporting the status quo in Israel, we bear responsibility for the destruction of this village and the dozens of others like it.

I head back to Israel this summer, joining more than 200 others in the “End 50 Years of Occupation” delegation with the Center for Jewish Nonviolence. We’ll be engaging in solidarity activism with Palestinians, like the Bedouins in Susiya and Umm Al-Khair, whose lives are threatened through displacement in the name of ongoing settlement expansion and occupation. 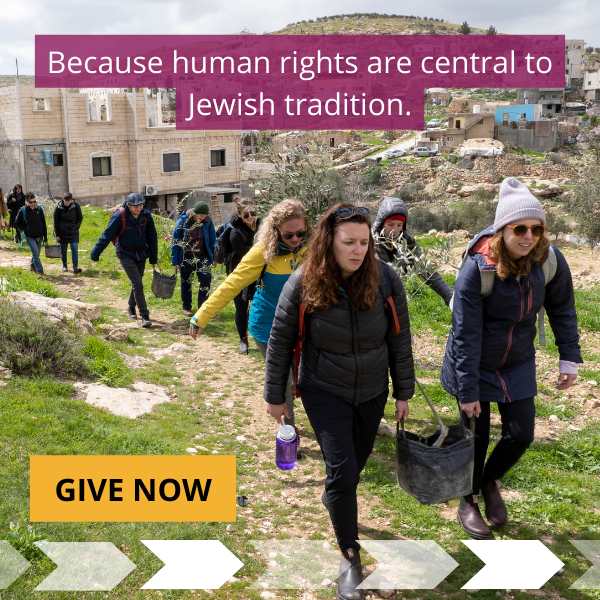